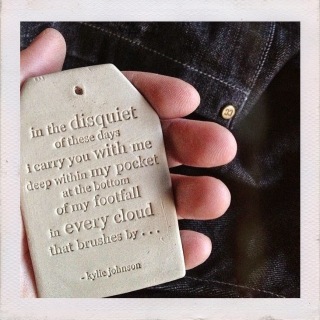 so this is the last thing. the last confession or unburdening or whatever. it’s been eating away at me and i don’t know how blogging about it will help but maybe it will dislodge this brick that’s been sitting on my heart squashing it into my stomach.

after i was assaulted i found out i was pregnant. i had waited too long for my doctor to give me the morning after pill but after awhile a good friend encouraged me to take a pregnancy test so that at least i could stop worrying about it. when i finally did i sat on the floor of my bedroom on the phone with a friend staring at the faintest pink line. if you’re thinking: it could have been prevented, you should have been thinking clearly, i should have gone to the hospital right away… i could have, i should have. i KNOW.
i know.
but then i had a miscarriage. people have kindly or naively or maybe hopefully said it should have been a relief… right? of all the things i felt through the pregnancy and after i don’t think relief even made the list. there was panic and dread and fear and loneliness and guilt and more fear and more guilt. but i also felt robbed… again. i’ve spend a good portion of my life looking forward to having a family one day and all that went with it… the anticipation, the nerves, the excitement, the moment of finding out… it was always a happy picture in my mind. i know things don’t always go as planned but and now more “first” experiences had been taken away by an act of evil and cruelty.
i also felt more alone than i ever thought was possible. i mean, after high school when i moved to the uk by myself and it dawned on me that i didn’t know a single person in the country i was living in… that was lonely. but this was infinitely different. first, i hadn’t told hardly anyone what had happened so how could i tell them this? and what if they didn’t believe me? and what if they told me to get rid of the baby? or what if they told me to keep it? basically the inside of my head was a roller coaster ride that i did not want to be on.
i never did find out the gender of the baby but in my heart and when i pray it’s always a girl.
some super honest thoughts: i thought about terminating the pregnancy, i thought about ending my own life, i thought about putting this perfectly innocent life up for adoption and i thought about keeping it. each possible decision broke my heart in different ways. it’s hard to even explain my train of thought because it was too overwhelming. but there were these tiny moments when i felt… i don’t know… not strength but maybe defiance. and in those small moments i wanted to love and protect this life growing inside of me. however her life started she was just as much mine as any other baby i’d ever have would be and i was just as much her mom.
but then she was gone and i was heartbroken all over again. there were more questions: did i have the right to be heartbroken over something i was so unsure about? and if i was sad about the loss didn’t that mean that i somehow wanted the baby? and if i wanted the baby didn’t that mean that somehow the assault was ok? (of course i know that the answer to these last one is of course not but honestly my head was such a mess and these were the questions bouncing around.) and more doubts: maybe i’m not meant to be a mom, maybe the baby was taken back because i didn’t love it enough, maybe i did something wrong, maybe the universe was playing some sort of cruel joke.
and then there was more loneliness. how could i explain what was going on to anyone now? i had dug myself this deep, lonely hole and now all i could do was sit in it. sometimes i still sit in it. i’m probably sitting in it right now. how i feel about what happened hasn’t changed much. there’s still shame, guilt, fear, anger, sadness, loss and so many unanswered questions. i guess the questions are now a moot point because it’s over. those decisions don’t need to be made now… but my heart hasn’t quite caught up.
plenty of time has passed and i keep thinking one day i’ll wake up and be over it… all of it. but that day hasn’t come. it sneaks up on me even on the best days and i don’t know what to do. i had every intention of being super productive today but it was pouring rain and my scary neighbor is getting scarier and i spent all last night worry about him… so i’ve spent most of today wandering around my house listening vaguely cleaning, and listening to “hallelujah” (jeff buckley), “here comes a regular” the replacements, “i shall believe” sheryl crow, “broken down palace” grateful dead,  “calender girl” stars and “leaving town alive” bethany joy lenz… not the cheeriest playlist but these old familiar songs are comforting.
i want to move on. i don’t want to be known as “the girl who was raped.” ugh… that word. my birthday is around the corner and i want to start that year off with clear eyes and an open heart. i’m attempting to start the 101 in 1001 project (again) because maybe a long list of goals will keep me from turning into a complete hermit and give me some things to look forward to. that would be nice.
and now, well… i don’t really know how to end this post i’ve started.
i guess i can end with thanks. if you’ve stuck with me this far then that means a lot. it’s strange writing about such private and painful experiences and your kind words don’t go unnoticed.
the image above is from paper boat press through their instagram feed.

2 thoughts on “the last piece of my heart”

8 minutes with a knee on his throat. Crying for his mom. Dying on the pavement. #georgefloyd #blacklivesmatter
making me happy
Peony season
tbt
🌸
Spotted in the wild