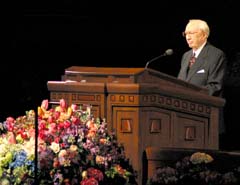 President Hinckley passed away last Sunday and I have finally been able to find a little time to sit down and read some of things things that have been written about his passing. It’s heart warming to read the kind and reverent words of so many people towards our beloved Prophet.

“On Monday morning this week, 12 hours after the passing of the 97-year-old leader of The Church of Jesus Christ of Latter-day Saints, President Gordon B. Hinckley, an extraordinary and spontaneous thing happened.

Young teenagers in Salt Lake City began showing up for school that day, dressed not in their usual jeans and winter clothing, but in their “Sunday best.” Young men sat in classes in white shirts and ties, suits and coats.

Thousands of them did this, with no prompting from parents or other adults and to the surprise of teachers. The idea, it seems, started with a few and then spread at unbelievable speed through text messaging, child to child. This was their way of showing respect to a man seven times their age and several generations their senior. Such was the power of this one extraordinary leader of The Church of Jesus Christ of Latter-day Saints to touch the lives of ordinary people.

I think President Hinckley would have liked the spontaneity and simplicity of that gesture.“

According to the article on the Church’s website this took place across 6 states, including Utah, Nevada, Idaho, Arizona, Texas and Washington D.C. The fact that a 97 year old man could have such a profound effect on a generation so much younger is remarkable. President Hinckley’s grandson, James Pearce, said, “He loved the youth so much. He really cared about them, and they felt that love. They acknowledged it with their behavior.”

It was not only the youth that were touched by President Hinckley. Below are some of the tributes given to our Prophet (there were more, lots more, but I tried to narrow it down):

President Hinckley was more than a leader of a Church, he was a great friend.

I have met very few people in my life who had his passion, his understanding or his wisdom. He will be sorely missed.

I met President Hinckley just once, in his offices in Salt Lake, but it was a memorable session. I was there with my Newsweek colleague Elise Soukup for a cover story commemorating Joseph Smith, and I was interested in discussing the idea of ongoing revelation. President Hinckley, I think, enjoyed the theological give-and-take, and was kind about my chances, as an Episcopalian, of reaching Heaven. What remains in my mind is a remark he made not only about his own role but about the great figures of prophecy through the ages. A prophet, he said, speaks to the times. That is at once an exalted and a humbling role — exalted in that so many heed him, and humbling in that religious believers hold that the times in which they live are transient, and that much of the human story is about seeking order and comfort beyond time and space. He was a charming and engaging man, an unlikely prelate — and all the more impressive for that.

Barack Obama was scheduled to visit Salt Lake City this coming Saturday, but the presidential hopeful has canceled his visit to Utah out of respect for President Gordon B. Hinckley whose funeral services will be held on Saturday morning.

Obama spoke with President Thomas S. Monson on the telephone to express his condolences.

“Last night I spoke with President Thomas Monson and expressed my deepest sympathies to The Church of Jesus Christ of Latter-day Saints on the passing of President Gordon B. Hinckley,” said Senator Obama.

With the death of President Gordon B. Hinckley the Church of Jesus Christ of Latter-day Saints and the entire world have lost a great and wise leader, a man of vision and courage.

The people of Iceland have lost a good friend and I offer the Church of Jesus Christ our sincere condolences.

I was privileged to benefit from my many dialogues and discussions with President Hinckley. His visit to Iceland some years ago was among the highlights of my Presidency. I will never forget our farewell in the green fields surrounding my Residence.

Furthermore, his presence and speech in Spanish Fork when the Icelandic community in Utah, the oldest Icelandic settlement in the United States, celebrated its 150th anniversary, were a great homage to the Icelandic heritage and my nation.

His prayers for my late wife, Guorun Katrin, who a decade ago was struggling with leukemia, touched the heart of my family and showed President Hinckley’s profound humanity.

As the people of the Church of Jesus Christ of Latter-day Saints mourn a great President, our thoughts are with you all.

I wish to offer my deepest regrets and sorrow to you in this mournful time. I have nothing but respect for the values that President Hinckley bestowed among the followers of your church and to us non-members who have personal ties and commitments together. In the brief times I was privileged to meet and talk with President Hinckley I instantly felt a warm, honest presence around him and knew when he said “there will be no problems” I could rest assured he would see to that. His decision to rebuild the beautiful Nauvoo Temple has forever changed the future for our town. His dedication to the temple construction, all the supporting structures and the future projects he has envisioned has and will preserve the beauty and serenity of our town for years to come. Many of us here know what gifts he bestowed on our community and even when he was met with negative souls, who stayed the course and I respected him for that.

The Mormon Church will carry on through this painful time and I’m sure with his soon-to-be announced successor will continue to grow. Please let the new President know we here in Nauvoo will show our support and respect that was earned by President Hinckley on to him. Every day when I drive by that magnificent white stone building, I’ m sure a memory of this great man will reappear and remind me to do my best to help his dream here live on. Please pass my condolences on to his family and the leaders of the church.

I was greatly impressed with President Hinckley as both President of The Church of Jesus Christ of Latter-day Saints as well as being a distinguished citizen of our noble land.

President Hinckley always received me with energy and elegance. It was always a special pleasure to have exchanged views on the situation in our troubled world.

You have my deepest sympathy to the Family and to the members of The Church of Jesus Christ of Latter-day Saints.

Dr. Hussein Hassouna, Ambassador of the League of Arab States to the United States

It is with great regret that I learned about the passing away of Gordon B. Hinckley, President of the Church of Jesus Christ of Latter-day Saints. I still remember meeting him during my visit to Salt Lake City a couple of years ago. I was impressed by his knowledge, wisdom and interest in world affairs. May his soul rest in peace.

On this sad occasion I would like to express to his family and all our friends belonging to the Church my sincere condolences and deepest sympathy for this great loss.

I join with millions of people around the world to honor and grieve for this compassionate and benevolent man. I became somewhat intimately acquainted with President Hinckley during my tenure as the Consul-General for Israel in Los Angeles, CA. The state of Utah fell under my jurisdiction and consequently I made several trips there. Each time I was warmly received by President Hinckley and other members of the Quorum of the Twelve. I even received a personal set of scriptures from him with my name printed on the cover, which sits prominently on my desk in the Embassy.

President Hinckley impressed me as a strong leader with an ability to understand the most crucial points of any issue. I greatly appreciate his significant efforts in bringing Christians and Jews closer together. In all of our interactions he was extremely courteous and respectful, with a marvelous sense of humor. I was particularly touched by his strong sense of morals and commitment to family, things which are highly valued among my people and culture. Based on my recommendation, my government acknowledged his exceptional contributions, and authorized me to present him with a special gift for his 90th Birthday. He kept that gift just outside his personal office. Due to my associations with him, and others of your faith, I make it a priority to introduce people from my country to your church.

President Hinckley will be missed by many people from all walks of life. I will personally miss him. He was certainly a great ambassador for the LDS Church to the world.

Gosh… so this is pretty much the world’s longest post. But I just have to say that my life has been so touched by President Hinckley and his loving kindness. Right after I joined the church I moved half way around the world to live in England. I had a wonderful ward and great friends but since I was American it was assumed I had always been a member. I felt so overwhelmed and lost. There was so much I wanted to learn and I wanted to learn it all now and I felt foolish in my ignorance.

And then I read a talk President Hinckley gave in which he said, “It is not an easy thing to become a member of this church.” That sounds like a negative thing but it wasn’t. Not at all. In that moment I knew that not only was everything going to be fine, but also that this was not just a man behind a pulpet or on a pedastal but someone who cared and understood. Since then I’ve cherished his words and his teachings, whether I was serving a mission or trying to figure out the next step in my life, going to school or teaching primary. If his death makes me sad I’m sad only for those of us left behind who will miss him, because I know he’s with his wife whom he missed so much. But I’m grateful to have had his influence in my life.

Here and there, and now and then, God makes a giant among men.